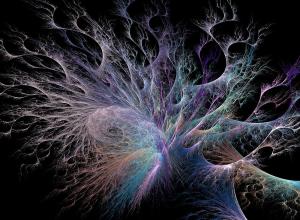 A fairly starved Gil started right in on the plate of eggs, sausages, and toast with butter and raspberry jam that appeared like magic before him. He didn’t care whether anyone else would be joining him. He would not be participating in conversation. He could not spare a single brain cell for anything other than the food in front of him and the inner workings of his own mind, occupied as it was, with gears, gaskets and temperature adjustments.

He could see the TDU clearly, behind the eye, all gleaming steel and aluminum, its curves and junctures, the placement of each nut and bolt. He’d studied the drawings for hours, had known since the time his father had asked what needed to be done how to correct the problems, but it was only now, with his father’s blessing, that he allowed himself the luxury of dwelling on the actual mechanics of its completion. Still, maybe fixing it was not at all what Marty was trying to tell him….

Gil missed his father terribly and wondered why his belly hurt now, months later, and whether those two things were connected. Maybe it was his Dad’s refusal to speak last night that reminded him of the truth of things. Since his death, Marty had so often visited Gil on the astral plane, that magic place where dreams intersect reality, that Gil had tricked himself into believing his father was still alive. But last night, Marty wouldn’t talk to him, no matter how much Gil pleaded. And now with Robbie…. A lump formed in his throat, a sensation he wasn’t used to, and he gulped down a mouthful of milk to wash it away.

He wiped his plate clean with the last bite of toast, downed the rest of his milk and belched. Max raised his head, wagged his tail, and went back to sleep.

“Gil!” Kori’s voice shook him from his reverie and he giggled. Avery stifled a laugh and took a bite of his eggs.

Kori was looking at him weird, like his mother used to. The resemblance was amazing, and when Kori stood and gave him a hug, he felt for a moment his mother’s arms around him, shuddered as her spirit passed over his bones. She’d want him to sleep, they both would, because his eyes were red and his nose still runny from being outside for so long, and she wouldn’t want him to get a cold. Still, he wasn’t tired, but wired with an unending series of thoughts and fractions of them. He didn’t want to sleep, he also didn’t want to think anymore; just wanted his mind to wait a little. And he sure as heck didn’t want to fight with Kori. Better go upstairs. Pretend to do what she wanted.

Kori nodded acquiescence. “What are you going to do now? Watch a movie?”

“Oh, really.” Kori raised her eyebrows in disbelief. He smiled at her and mustered his most innocent facial expression.

“Bring your plate to the counter then.”

Gil obeyed, placing his plate and cup in the sink. “Good night,” he said and turned on his heel. He smiled to himself as he left, pleased with the deception. Max jumped up with alacrity and followed Gil out the door.

“I need to run some errands this morning,” Kori called after him. “Avery will be here if you need anything, but you probably won’t because you’ll be sleeping.” Gil turned and from the corner of his eye saw Kori and Avery exchange a glance; he feigned obliviousness.

“Okay,” Gil said. Mother instinct. They must be born with it . Plans foiled, the smile left Gil’s face as he and Max rounded the stairs to his room.

Gil waited forever while Avery ran the snow blower up and down their winding driveway and Kori shoveled out the walks. He was waiting for his chance to escape to the barn. He needed to decide whether to fix the TDU and maybe looking at it would help him. He paced the floor, indulging his impatience, then sat down on the floor, closed-eyed and cross-legged, concentrating on his breathing like Avery had taught him, but neither helped. After forever and ten minutes, he threw himself on the bed, pulled a blanket up to his chin, and stared at the ceiling. Patience was not his forte. Visions of valves and pistons danced in his cerebral cortex. Gil sighed and drew a deep breath.

“You almost need an oil company,” Marty said. “Otherwise, how do you think we’ll get the oil to the dealers? UPS?”

Gil laughed. My father, the card.

The back door slammed and Gil knew Avery had come inside. He sat up and looked around, rubbed his eyes. The room was empty.

“Rats.” The clock said he’d given the last four hours to Morpheus.

Gil listened at the top of the stairs and heard Avery banging around in the kitchen. He sniffed the ambient air with a deer-like adeptness and his stomach rumbled in response. Heavenly smells wafted toward him, threatening to derail his plans. Melted ham and cheese. Impulse and hunger almost threw him over the railing.

Gil found Avery bent over the toaster oven, fiddling with the sandwich makings inside. He looked at the table set for two and a satisfied smile crossed his face. He snuck up behind his brother and peered over his shoulder.

Avery jerked, slamming the door to the toaster oven as he did so. “You…have got…to stop …doing that,” he said, turning to his brother in slow motion.

“You know where they are.”

Gil retrieved the chips then watched as Avery pulled the melted deliciousness from the toaster oven. His mouth watered at the sight of his second favorite food in the entire world, his first being roasted pork cooked with loads of garlic, rosemary and sage, and a heaping pile of mashies on the side. Despite his culinary dispositions, Gil hadn’t thought much about how indebted he was to the pig. He opened the bag of chips, laying a handful on each plate, routed around the bag, found and stuffed the biggest chip in his mouth, and sat down.

Avery set a glass of milk in front of him and they ate in silence while Gil did a little happy dance in his chair. He finished his sandwich, downed the milk and raised his plate.

Avery raised his eyebrows and looked at Gil point blank.

Avery retrieved a second round of sandwiches from the little oven, placing one on each of their plates. Gil leaned in close and sniffed in a lung full of ham and cheese. He held it a moment, before taking a whopper of a bite.

“Did Robbie really go to Iraq for oil?”

Avery dropped the hot pad on the counter and took his seat. “I don’t know. Sometimes I think there were some factors other than economic, perhaps humanitarian, but then I think about what the real legacy of the current administration will be and I wake up.”

Gil stared at his brother, perplexed. “What are you talking about?”

Gil rinsed his food down with some milk. “Kori thinks it was for oil.”

“Kori’s a cynic. But… she’s probably right.” Avery looked over at Gil’s crumby, milk-kissed mouth and handed him a napkin. “Does that upset you? I mean, would it upset you more?”

“You mean if he died for oil instead of something else important?”

Gil nodded, gazing out the window. “Uh-huh. Especially if I can make oil out back.”

Gil shrugged. He’d been unable to formulate a coherent opinion on the subject, and all sources of help he might have received, divine or otherwise, weren’t talking. They finished their sandwiches in silence.

“You gonna do what Dad said?” Avery asked. “Fix the TDU?”

“I’m not sure yet.” Gil shoved a few chips in his mouth, but didn’t respond.

“If you decide to, I can get a few startup loads of trash.”

Gil dropped his plate in the sink, wiped his mouth with the sponge and grabbed his coat.

“First of all, that’s gross.  Second, I don’t think Robbie’s . . . dead.  But regardless, the world still needs Dad’s contraption. Even if you don’t have a reason to build it.”

Gil gave Avery the briefest of hugs, rounded on his heel and ran out the door.

4 thoughts on “love for oil”