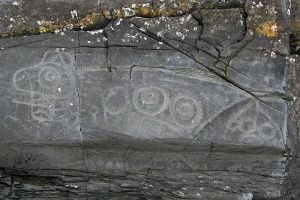 Street lights struggled against a foggy, moonless night, their beams of light crashing to a halt against the first heavy water particles they met. Only intermittent porch lights remained aglow; the occupants of the homes on Willow Street were asleep for the night. A car crept down the road, pulled into the Tirabi driveway and killed the lights and the engine.

Upstairs, Gil flicked on the small light next to his bed, his own invention, a forearm and claw. The light emanated from the palm of the claw and down toward the base which held it in place. Kori had helped him with the design.

Gil held his breath to better hear the outside world. He threw the covers back and walked on silent feet to the window. Despite the chilly November air, Gil slept with the window cracked. He drew back the curtain a hair’s breath, allowing only enough space for one eye to peer down to the car parked in the driveway. A Pacifica, Gil thought, but his one eye couldn’t confirm it.

Muffled sounds emanated from the car and Gil could see the windows starting to fog a little bit. The door opened a smidgen and then swung wide. Gil drew a sharp intake of breath and pulled back from the curtain. He stood in silent contemplation, eyes rolling back and forth as if trying to deduce further information. After several seconds, he bolted out the bedroom door and ran down the corridor, taking the steps two at a time. He grasped the door knob with both hands and yanked the door open where it banged against the wall, sending a shiver through the spine of the house.

“What the heck are you doing?” a disembodied voice asked as it rounded the corner and came up the front steps. Gil let out a short whelp and jumped full on at the approaching figure, wrapping his arms around its neck and squeezing for all he was worth.

Robbie dropped his bags just in time to catch his brother, but not in time to get his balance. The pair went clattering to the ground in a confused tangle of limbs, their fall broken only by the bags at Robbie’s feet. “Gil,” he grunted, more of a guttural sound than a word. Gil released his death grip and Robbie wheezed, regaining his breath. He raised himself on one elbow and Gil did the same as if lying on duffel bags on the front stoop in the middle of the night was a normal thing.

“I knew you were coming back tonight,” Gil said. “Kori said not until tomorrow, but I knew it would be today.”

“Well, technically Kori’s right since it’s after midnight, but we’re not going to tell her that, right?” Robbie asked. Gil nodded and lunged for his brother again, toppling him back and onto the ground.

“It’s been three months and twenty-seven days,” Gil said into Robbie’s neck.  Robbie rubbed Gil’s back in a circular motion.

“I missed you, too, buddy,” Robbie said. “What do you say we get out of this fog.  It’s creepin’ me out a little.” Gil helped Robbie to his feet and grabbed his duffle bag, grunting with the strain of it. Robbie smiled watching him crash and bang his way into the foyer. A light crept out from under Kori’s door and spilled down the stairs.

“Hawk at twelve o’clock,” Robbie said and Gil looked up the stairs to see Kori’s slippered feet standing at the top.

Kori’s voice spilled down the steps: “Gil. It’s the middle of the night.”

Robbie’s voice was hoarse from lack of sleep. “He did the hospitable thing and came to greet me.”

“Robbie!” Kori ran down the stairs and jumped into Robbie’s arms, knocking him down for the second time in the last five minutes. He lay sprawled out on the floor with Kori straddled on top of him. She blushed, mumbled an apology and pulled him to his feet. She held his grip and stared at him intently for a moment, a specimen under a microscope. He folded her into his arms and in a heartbeat she returned the mantle of responsibility to her younger brother.

“That bad, huh?” She shook her head and stifled the urge to cry. He squeezed tighter.  “Hey, how about a drink?”

“Yeah, hot chocolate!” Gil yelled. A moment later the hall light clicked on and a crusty-eyed Avery stumbled out of his room and into the hallway.

“Gil?” he called downstairs. “Are you alright?”

“He is now,” Robbie called back.

“Robbie!” Avery said, taking the stairs two at a time.

“When did you get home? I mean…that’s a stupid question. Why didn’t you tell us you were coming?”

“The element of surprise, my brother.” Robbie and his lopsided grin were home. “C’mon. I’m starving. What’ve you got to eat in this place.

“A little salmon with lime and Wasabi sauce,” Avery said. “My own creation.” Robbie crinkled his nose.

“A little spanikopita from Aunt Stella,” Avery said. “And some baklava for dessert.”

Robbie’s eyebrows shot up in appreciation. “God, It’s good to be home.” He wrapped his arm around Gil’s shoulder and they headed for their midnight raid on the refrigerator.

8 thoughts on “salmon with lime and wasabi”