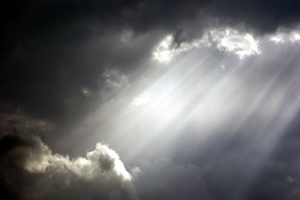 Hart arrived home sometime before dawn.  He quickly surveyed the exterior before unlocking the door.  Sometime in her seventh month, Sonia developed bionic hearing; the tiniest creak of the floor boards and she bolted up in bed.  Not wishing to disturb her, Hart tiptoed across the threshold and placed his bags at the foot of the stairs with painstaking slowness.  As he stood, light flooded the living room.

Sonia locked him in a bear hug.  “I missed you,” she cooed, kissing his face all over.  She jumped down the last two steps, grabbed a suitcase in each hand.  They dangled like misplaced appendages.

Sonia dropped the suitcases to the floor with a thud and stared wide-eyed at her husband.

“What?  They were too heavy.” Hart said.

“Contraction,” she replied.  She wagged a finger to a ready-packed bag in the corner.  Hart leapfrogged over his own felled luggage as Sonia headed up the stairs.

“You call the doctor while I put some clothes on.  I’ll meet you in the car.”  She leaned over the railing and blew him a kiss before ascending.

Four hours later, they were back home, the baby still cozy, floating in Sonia’s belly.

“What are you going to do now?”  Sonia pouted.   Please don’t go into the office.”

Hart smiled and kissed her cheek.  “I’m going to take you out for breakfast and a walk along the creek.  Then we’re going to take a little nap, you and I, cause we’re both way tired, and then I’m going to do right by you.”  He squeezed her hand, intoning his meaning.  “Then an early dinner and only after I’ve popped a movie in and propped you up in bed will I go to the office.

“I have to go see Bicky today.  He wants a debriefing.  In person.  But my person is going somewhere else right now.”

“Well, hey, what are we waiting for?  Why don’t we just go?” he said.  “Move that stuff.” He tossed her backpack to the back seat.  A large manila envelope spilled out, addressed to Bicky, marked Personal and Confidential.

Sonia released a mini tornado of air.  “I should have never….”  She stopped and eyed Hart up, remembering Bicky’s none-too-veiled warning.  “It’s Bicky’s.  I was gonna to take it to the post office today.”

“Shall I take it to him tonight?”

Sonia hesitated.  “Okay.  I guess.”  The envelope was sealed.  If Hart opened the letter, Bicky would know it.  And David wasn’t one to pry.  She shoved the envelope into her backpack.  “I’m going to go in and squirt.  I’ll be right out.”

“You never can get yourself to say the word pee can you?  What are you going to tell our son?  C’mon, baby.  Time to squirt.”

“What’s wrong with that?”  She waddled off while Hart watched her go, a gleam in his travel-weary eyes.

to read what came before, scroll down. . .